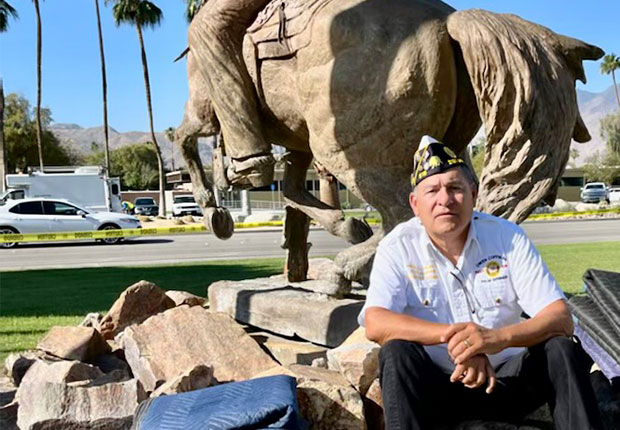 Despite being served a Restraining Order on Monday, City Council accelerates scheme to #CancelCulture the status and rip apart the fabric of nearly 60 years of Palm Spring heritage.

The rush move comes after city has previously paid tribute to the mayor and subsequently failed to find another solution for the historic monument to Palm Springs’ beloved mayor.

Palm Springs — The Palm Springs City Council is plotting a rush maneuver to rip down the Frank Bogert statue today — even after they were served a restraining order on Monday to keep their hands off of the public work of art. 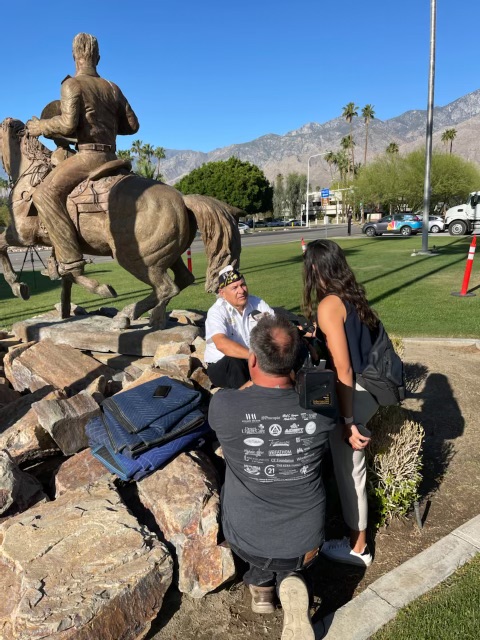 Protestor Amado Salinas speaks with the media as he sits alongside the statue of longtime Palm Springs Mayor Frank Bogert. Salinas said, “Frank was there for our city, now we need to be here for Frank and our city!”

Friends of Frank Bogert — a grassroots group formed to provide sunlight to the process and to defend the former mayor’s record as one of Palm Springs’ favorite mayors whose formal service as mayor spanned 14 years — filed for the protective order last Friday and it was properly served to the City Council yesterday.

The matter of the removal was headed to a court hearing this Wednesday but instead, the City Council appears to have hatched a dark-of-night plan in which they will begin chipping away at the base of the statue as early as Tuesday morning — before the public is even aware of their actions.

“This is an atrocious rush to judgement,” said Rod Pacheco, attorney for Friends of Frank Bogert and Frank’s widow, Negie. “Before the matter is heard on Wednesday, the City Council is circumventing the judicial process and readying a scheme to rip apart the fabric of Palm Springs history. Their rush to rip the statue out of its rightful place is an admission of guilt that they know the court would rule against them. I’m here at court today to ensure that the city does not carry out a miscarriage of justice.”

All of this comes as the city has failed to act to find a solution for the statue:

Ironically, the city has previously paid tribute to Mayor Bogert, including producing a tribute video touting his numerous accomplishments for Palm Springs. It appears to now be doing an about-face in the wake of #CancelCulture demands.

“We are shocked that the city we believed was operating in good faith would do such a thing,” said Frank’s widow, Negie Bogert, a Mexican-American who served as a beloved First Lady of Palm Springs who welcomed all to the region. “The thought of Frank’s statue being ripped out is like him being ripped from us all over again.”

“All of this could have been resolved initially had the City Council had the professional courtesy to simply speak with the surviving members of the Bogert family,” said Pacheco. “Instead, they have dragged his memory through the mud and have taken the family and the entire City of Palm Springs with it.”

Bogert was the longest-serving mayor in Palm Springs history.

His service and accomplishments can be read here.