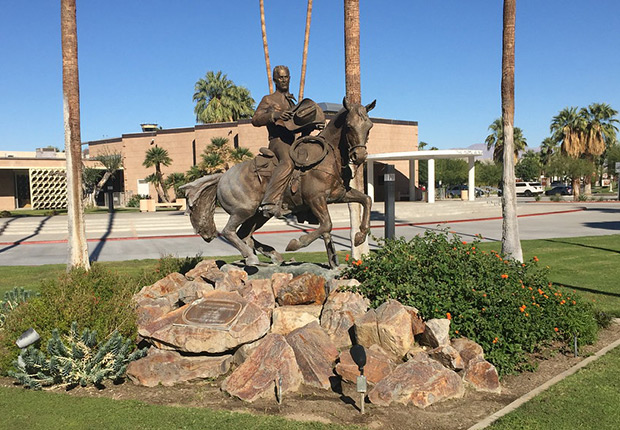 After City Council has been unable to find or even consider reasonable alternate locations, widow of Frank Bogert and community group formed to protect his legacy have no choice but to seek a legal remedy for the statue honoring one of Palm Springs’ favorite mayors.

Palm Springs — The future of the statue honoring Mayor Frank Bogert hangs in the balance yet again, as the City Council has not acted, thereby forcing Frank’s widow to go to court to seek a remedy.

Today, Friends of Frank Bogert filed a lawsuit against the City of Palm Springs that seeks a final remedy for the location of the statue, which has stood in front of City Hall for more than 30 years. Frank’s widow, Negie Bogert, is president of the group.

At issue is protecting Bogert’s statue and, indirectly, his legacy as one of Palm Springs’ most beloved mayors and public servants. Mayor Bogert was instrumental in the development of the Palm Springs airport, the Palm Springs Convention Center and helped make Palm Springs an international destination.  Bogert was a friend to people from all walks of life and welcomed everyone from working class citizens to U.S. presidents and British Royalty.

The lawsuit is filed today to protect the statue and Bogert’s legacy from unfounded attacks. A report from the Palm Springs Human Rights Committee (HRC) sparked this controversy, and some members of the City Council falsely defamed Mayor Bogert. Even the HRC’s chairman Ron deHarte admitted that the attack was politically motivated when he publicly stated: “Some may feel that the recommendation to move the monument is a political effort made to appease one other group. Well, they are indeed correct.”  Additionally, and as detailed in an extensive rebuttal by Friends of Frank Bogert, the HRC’s fallacious report fanned the flames for the statue’s removal, misled the public and was offensive to members of the Agua Caliente Tribe.

The Palm Springs City Council directed city staff to find a way to remove the statue of Mayor Bogert. However, the local municipal code did not allow for such a removal based on “cancel culture” accusations. In addition, the Mayor Bogert statue had been previously declared a historic resource by a former City Council in a 2012 resolution. The city also failed to follow state environmental laws (CEQA) as well as state law regarding fine art, both of which protects the statue — a historic resource — from removal.

The lawyer for the case, Rod Pacheco, said, “The city has acted unlawfully in trying to justify its desire to ‘cancel’ Mayor Frank Bogert despite his unselfish donation of public service to building the modern city that is Palm Springs. Fortunately, courts aren’t driven by politics or woke boycotts.”

Frank’s widow added, “With time running out to achieve a consensus, we are left with no other choice but to fight for my husband’s legacy as the kind, warm, and beloved public servant he was to all in Palm Springs. Frank was a fighter — first in World War II, then fighting for all in Palm Springs. Frank’s legacy is now being attacked by city officials who never knew him, and who are attempting to rewrite history for their own ulterior political motives. These attacks have made it feel like Frank has died all over again.”

Frank served as mayor in the 1960s during part of the decades-long Section 14 controversy and was elected overwhelmingly by the people of Palm Springs to serve as mayor again in the 1980s. The statue, which was donated to the city by private citizens, has stood at City Hall for decades and until recently no elected Mayor or City Council has questioned its rightful place. In fact, past Mayors have spoken at his funeral, participated in tributes, and expressed their high regards for his contributions to the city. Simply put, the facts surrounding Section 14 and Bogert’s legacy never changed — but rather the ideology and motivations of select city officials did.

Many decades past, the Agua Caliente Tribal Council and its members came to the city to ask for help in taking control of their lands, which were severely restricted by the federal government. Tribal members sought help from Mayor Frank Bogert to change federal law and help lift the tribe out of poverty. Ultimately Mayor Bogert and the tribe were successful in changing federal law which caused an economic boom for Palm Springs as a city.